Greg McKenney of Tallula is the “voice of the farmstead”. He’s webmaster for the website, keeps the Facebook page updated, and serves as announcer at farmstead events and the annual dinner meeting.  McKenney’s experience comes from working as a D.J. and program director at various Arkansas radio stations from 1972 until the mid-80’s. He’s been a computer programmer and web developer for over 30 years and currently works for the Illinois Dept. of Human Services. Born and raised in Russellville, Arkansas, he moved to Illinois in 1990 with his wife Avis and their children. His announcing style combines information, humor, and just a bit of his remaining Arkansas accent to make for a smooth presentation, no matter the occasion. HMFA appreciates the part he plays in communicating its message to the public!
Marbold Moment 04/28/2019
In the February 1988 issue of Menard Quarterly (once published by the Menard Co. Historical Society), Mrs. Shirley Williams of Greenview wrote a long letter to the editor regarding an article about the Marbold family. Here are just a few lines:

Dear Rodney Dimmick:
Thank you so much for your fine article on the Marbold family in the Menard Quarterly. A copy went to my step-granddaughter in Germany.

I wanted to tell you that my husband’s sister lived there (at the old Marbold house) 25 years ago. These are some of the things I remember about the place: the marble floor in the bathroom, the colored glass around the top of the flower room (conservatory), also the colored glass window at the top of the main staircase. I believe there was a frosted glass in the front door with a reindeer standing among pine trees and bushes.

In 1917 Mr. Williams, my father-in-law, worked for Frank Marbold, cutting logs from the timber.

Another thing in my memory: you know the highway (Rt. 29) used to run a different way. I can remember of a night, the lights reflecting on the windows of the old Marbold house as you drove past. That’s so long ago. I still wish it could have been saved.

Mrs. Williams would be glad to know that 31 years after she wrote this letter, the house is being saved. Her memories are a special gift to all those involved in its restoration.

Marbold Moment 04/18/2019
An ad from The Illinois State Journal dated February 22, 1920 offers horses and mules for sale by Harmon Marbold, son of H.H. and grandson of John, who established Marbold Farmstead in 1850.

HARMON J. MARBOLD'S ANNUAL SALE
50 HORSES AND MULES
I will sell at my residence 2 miles southeast of Greenview, Ill., beginning at 11 oclock on Wednesday, February 25, 1920
40 MULES Including 2 pair 5-year-old mules, 16  4-year-old mules, 20  3-year-old mules. All broke to harness and gentle.
10 HORSES Including several mares.
Lunch will be served by the Ladies of the Christian church.
Parties from a distance will be met at the morning trains in Greenview and returned to the depot in the evening.

In the book Past and Present of Menard County, Illinois, published in Chicago in 1905, Harmon is described as “an active and successful business man, energetic and public spirited, and honorable in all his dealings. He must have had a good reputation for people to take a train from a distance to attend his sales. Whether it was the custom of the day or Harmon was just very accommodating, it's interesting to note that he offered transportation to and from the train station. That same station is now in Dr. Karl Downing's back yard at the stone house on Rt. 29 given by H.H. to his daughter as a wedding gift. Several years ago, the station was going to be burned down and Dr. Downing didn't want to see part of Greenview's history lost, so he built a foundation and moved it, with much effort and help from friends, to his property. It's now in service as a workshop and storage area.
Marbold Moment 04/11/2019
Making models is not just a hobby for kids. Paul White of Petersburg started building remote control model airplanes 35 years ago. So when cabin fever hit hard one winter 20 years ago, it was an easy transition to go from planes to doll houses. As Paul says, "You use many of the same techniques for building both."

He ordered a dollhouse kit, and Paul did the building while his partner Brenda did the furnishing and hand sewing of tiny linens. Six more dollhouses followed, some given as gifts and some put on display in their home. In 2016, Brenda suggested another model, this time on the largest scale they had attempted. Because Paul had just started working as a volunteer at Marbold Farmstead, she thought a model of the main house there would be just the thing.

They began working on it in 2016. In its partially-completed state, it has been displayed at Petersburg Harvest Fest, HMFA's annual meeting at First Baptist Church in Greenview, and at events at the farmstead. The house is so large that it's built in three sections that fit together.

Paul said that sometimes he got on a roll, and once worked 17 hours straight on the project. He took hundreds of photos and used the architect's drawings to duplicate the real structure.

It was finished this winter, and from now until May 31 2019, it will be on display at Athens Library. The smallest details are present: a pair of women's high-top shoes, a Bible, and even a portrait of H.H. Marbold, son of the man who established the farmstead. Don't miss the chance to step back in time and see not only the craftsmanship that went into this lovely home, but also to envision life in the 19th century in a stately house on the Illinois prairie.

We gave the model it's own photo album at Marbold Model.

Marbold Moment 03/16/2019
Sprucing up the Home
After the marriage of H.H. Marbold to Margaret Hackman in 1860, they lived on the farmstead with his father John, who had been widowed before he came to the U.S. in 1847. They made improvements to the home as styles changed and their prosperity afforded it. In 1868, they purchased from Charles Tobey Co. on State St. in Chicago literally an entire house full of new furniture including: a simulated rosewood parlor set with horse hair cloth, a damask lounge, a chestnut chamber set, a smoking chair, oak dining chairs, children's rockers, corner whatnots, a mahogany center table and, washstands, combination mattresses and bedsteads, large oval extension table, and numerous other items. Some of this furniture is still within households in the Greenview area, either those of descendants of the Marbold family or those to whom they owed money after the failure of their bank during the depression. HMFA has been told by some people that they will return original pieces to the house when interior renovation allows for it. This will add greatly to the interpretive value of the home!

Marbold Moment 03/09/2019
One of several outbuildings on the Marbold farmstead is the ice house, built in 1902. It's constructed of brick, with slate shingles and a heavy wooden door. The original building still stands, with a cornerstone engraved with the date; it has new shingles and a repaired cupola. The ice was cut with special saws at a pond across the road during the coldest days of the winter, then hauled over to the ice house by a horse-drawn wagon. Each block would be 15-18 inches square. The building had a 15-foot drop and the blocks of ice would be lowered using a block and tackle, then packed in sawdust and straw. The ice would last throughout the year and then be replaced again the next winter. Starting in the early 1900's, families used ice in wooden iceboxes in the kitchen to keep food cold. During the warm months, they'd use it to make ice cream and lemonade. What we have at our fingertips today involved quite a process years ago! 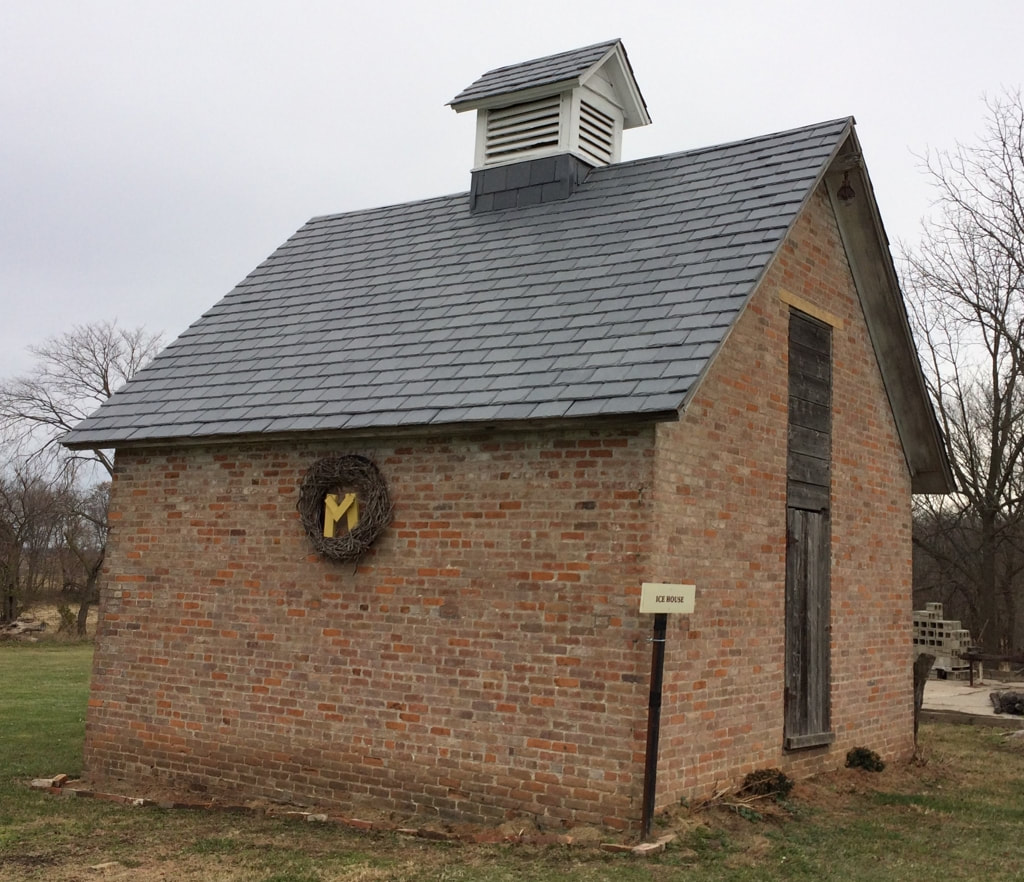