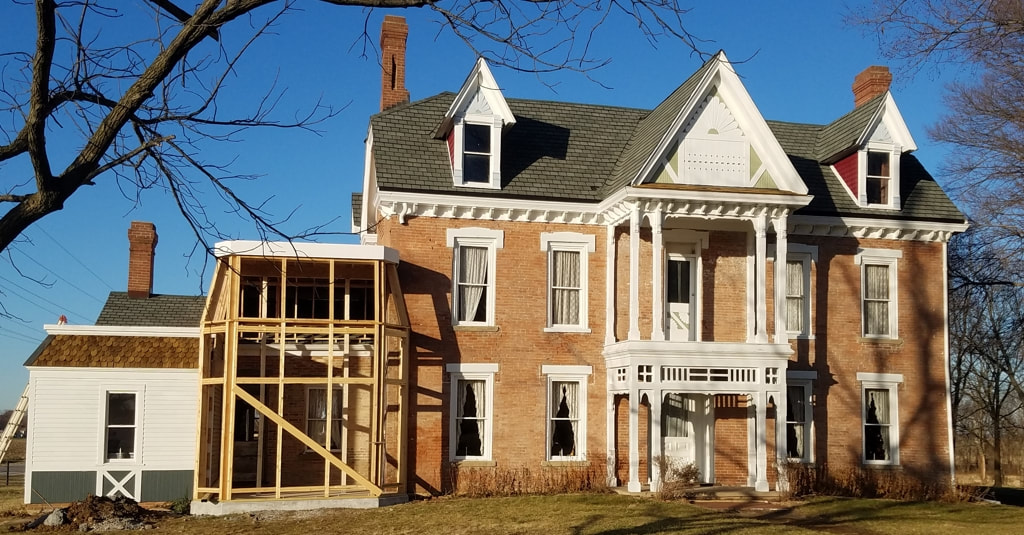 2019
​The Historic Marbold Farmstead Association purchased the Farmstead in 2012.
Since the purchase, the Association has focused on various restoration projects, as shown in photos below.
Restoration Progress Made During Busy Summer 2019
Scaffolds, lifts and ladders, oh my! All were equipment needed to accomplish the restoration of the soffits, dormers, trim work, tuck-pointing, and stabilization of the house. Immediately after the June event, Damon Dennis evaluated the foundations and found an invasion of groundhogs! Brick mason David Vaughn assessed the east parlor wall and found it to be three inches off plumb. Not a good thing. Historic structures architect, Dave Leonatti, visited the site to help Damon determine the best approach for repair and restoration. The results were as follows: before any tuck-pointing could be done, the foundations had to be repaired, either by re-pointing old brick work or by pouring concrete in the tunnels/holes created by the pests. Since the east parlor wall was off-plumb, a stabilizing wall had to be permanently installed in the parlor to keep the wall from further movement issues. Tuck-pointing on the north parlor wall and window could then begin simultaneously with the repair of the huge stairway landing crack. Mr. Vaughn painstakingly worked a little on the outside and
then a little on the inside in order to keep the east parlor wall intact.  Other areas tuck-pointed were the
headers of doors that lead into the conservatory area.

The lift made work on the dormers and trim work much easier and safer. Wood trim had to be repaired or replaced. Before painting the gable of the south porch and the dormers and trim, all had to be cleaned,  scraped and sanded—tedious and laborious work. But the results speak for themselves.  The east end of the parlor has new soffits rebuilt by Damon. His expertise has restored them to their original beauty. The soffit on the north end of the house has finally been repaired and reinstalled. Both projects seal the house from weather-related issues—a good thing!  The decorative corbels are now restored and repainted, adding color and definition to the eaves of the house. All these things together bring the home back to life! Great progress is being made and it is good to have accomplished several projects that, as the Historical Struc-
ture Report stated, were a priority.  Click on a picture to get a better view. 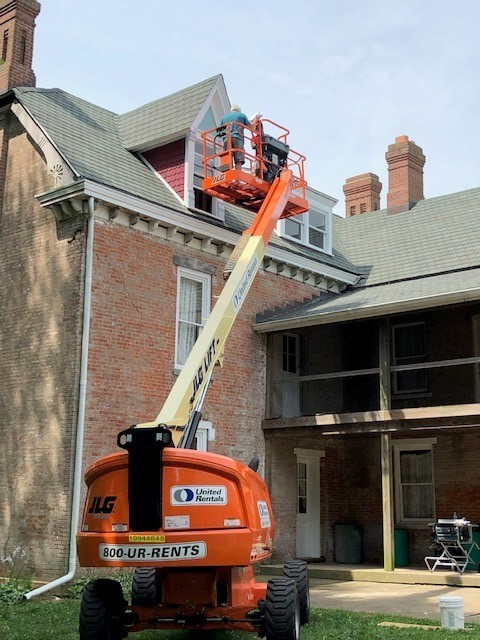 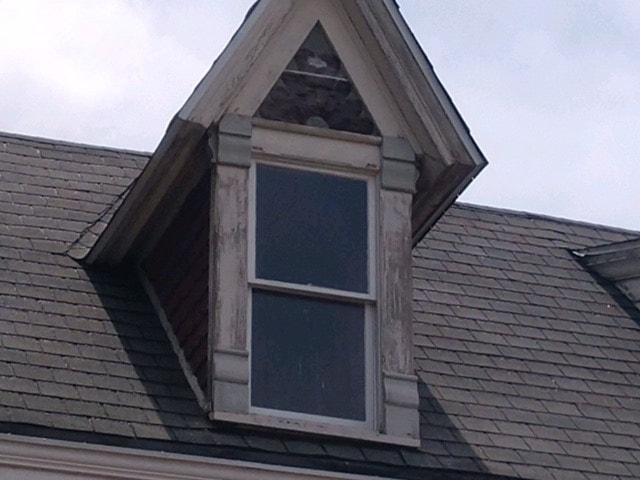 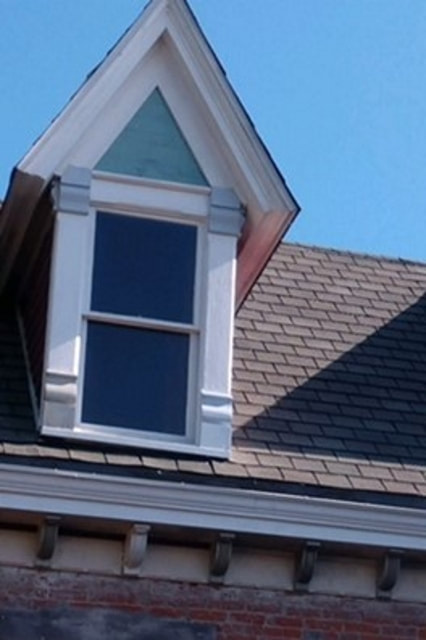 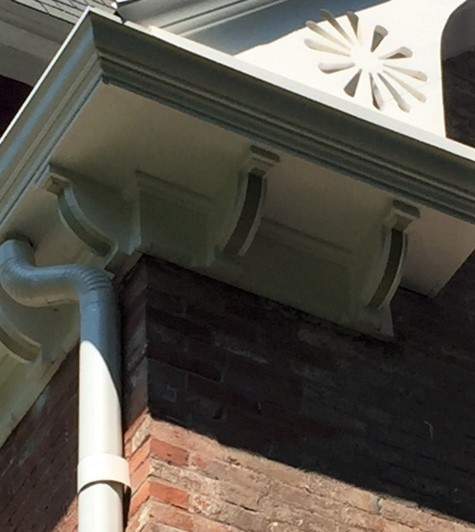 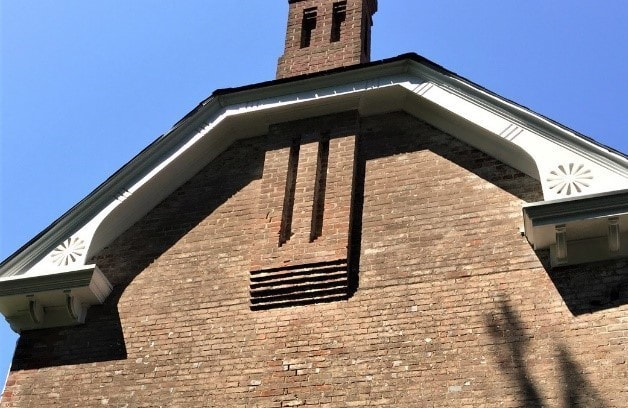 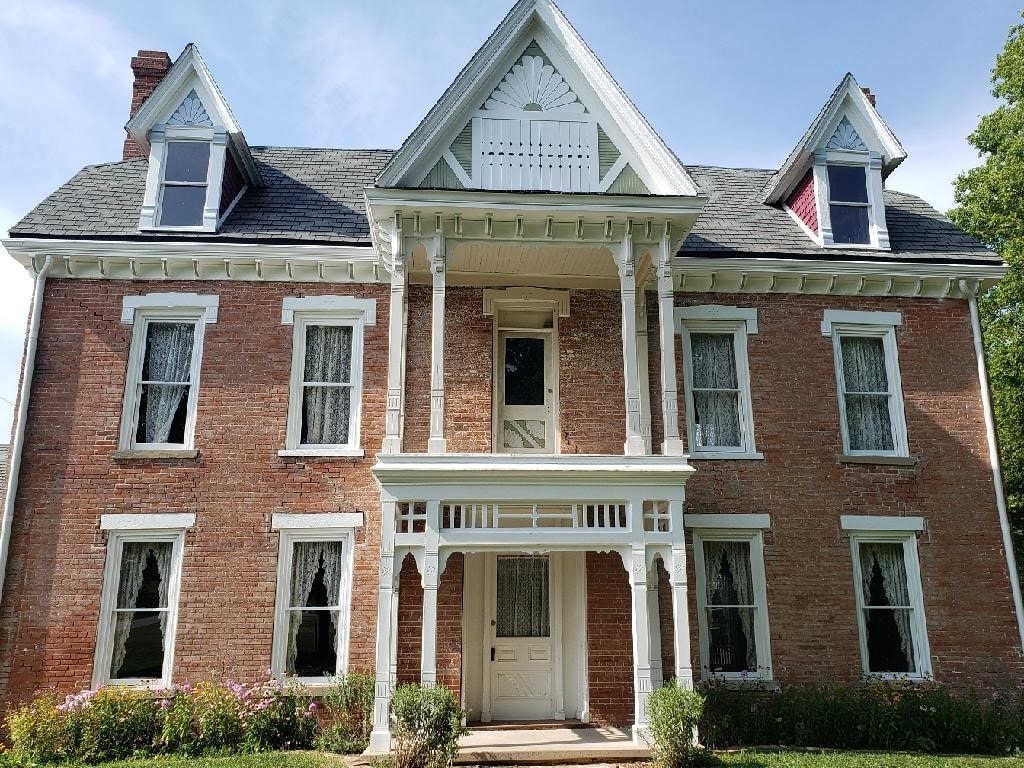 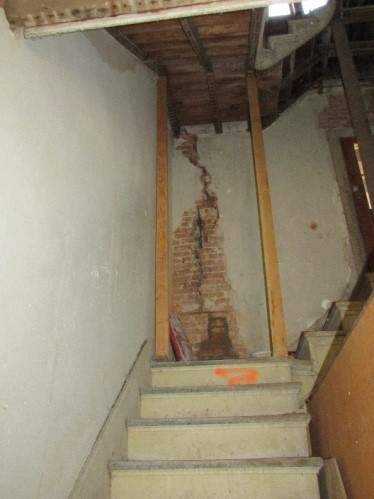 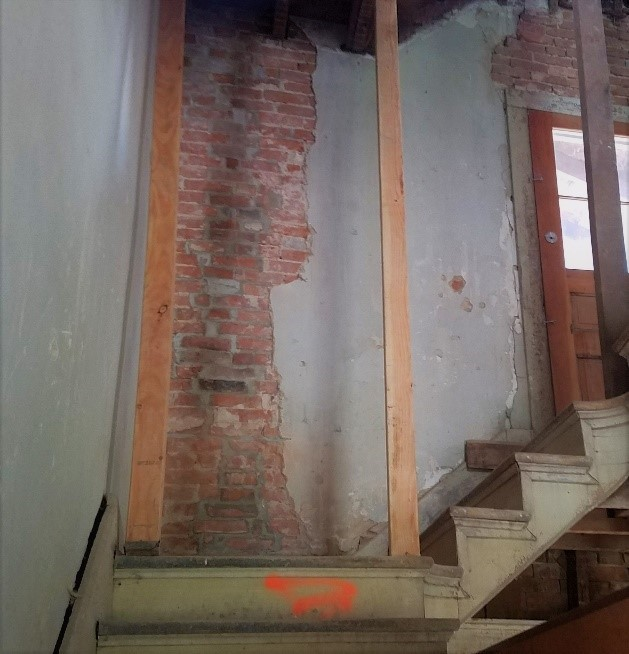 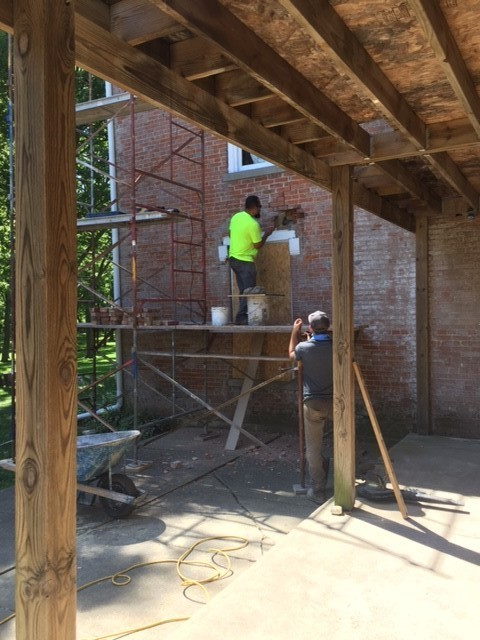 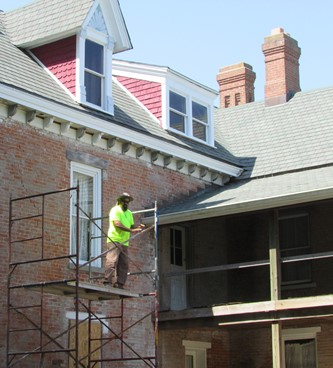 Jake Castleman and Ken Hawkinson work on glazing and reinstalling windows.  Contractor Damon Dennis  shows how the windows are tighter since locks were repaired.  This work continues through the first part of 2019.
During the last half of 2017 and early 2018 roofing was installed on the North Annex and we replaced the roofing on the main house.  The summer kitchen got new windows and its chimney is now ready for a cook stove to be attached.
During June 2017 the entire roof was replaced and the cu-pola repaired and painted on the Ice House.  The work was done by local roofer, Dallas Gresham and his crew. This building is now ready to withstand the elements of the prairie winds and weather. The after picture below shows its beauty. A brick located at the southeast corner of the building is engraved with the date “1902”.
During 2016 Progress was made on the summer kitchen and carriage house with the completed roof and covered walkway over the entire north annex,  These pictures were taken in November 2016.
​In the fall of 2015 the Board of Directors felt that the North Annex, which was in major decline, should be designated a priority in the restoration of the Farmstead. The North Annex incorporates the wash house, the dairy room, smoke house, carriage house, and summer kitchen. A new roof and floor were added, as well as new footings and foundation for the wash house's north wall put into place. New, handmade windows will be installed and the original door will be restored. 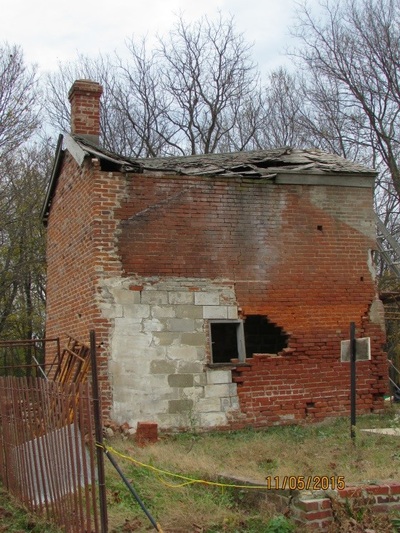 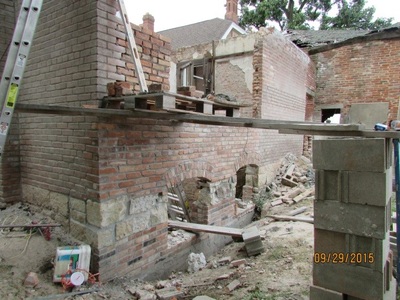 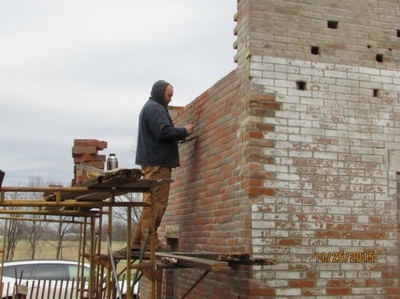 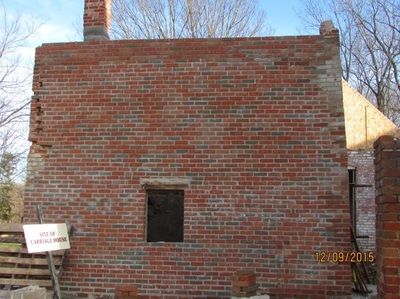 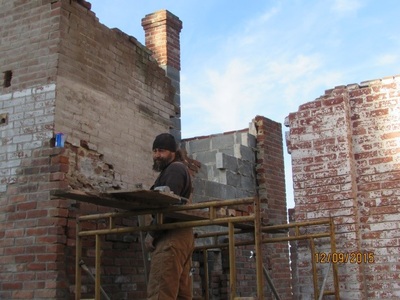 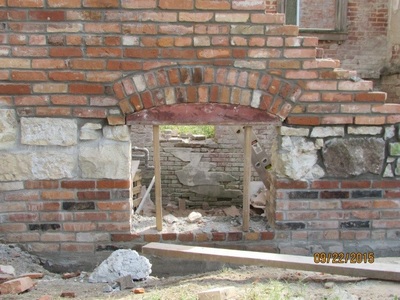 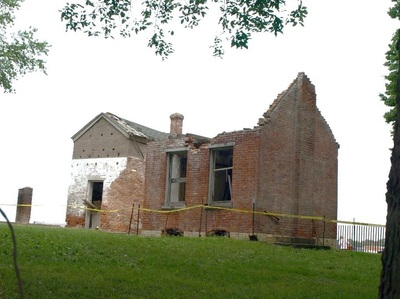 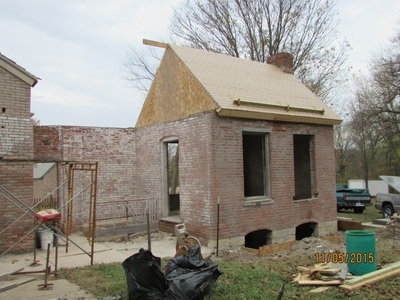 In 2013 a new kitchen sub-floor was  installed.  The Ice House roof and cupola also were repaired.  The soffits, gutters, and downspouts were restored.  Beautiful corbels were also added to the roofline. . 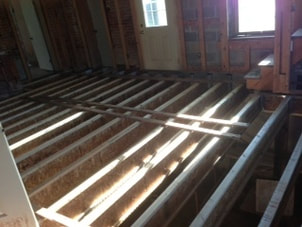 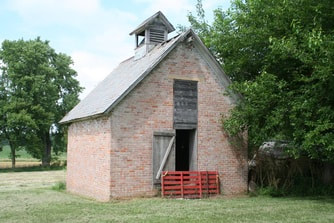 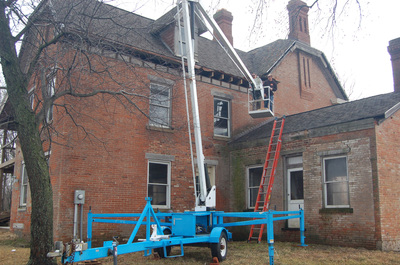 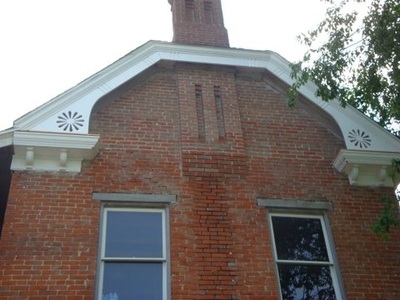 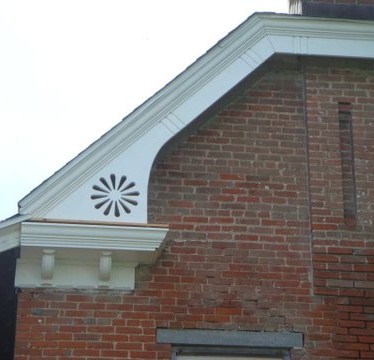 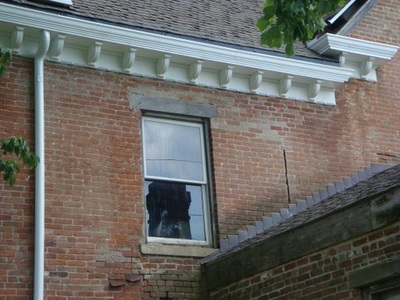 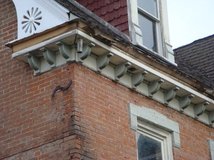 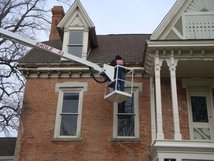